BRAMS is pleased to announce that its co-directors Prof. Isabelle Peretz (Université de Montréal) and Prof. Robert Zatorre (MNI, McGill University) have been awarded The Fondation IPSEN Neuronal Plasticity prize 2011 for their works in the domain of music and brain plasticity. They share this prize with Prof. Helen Neville (University of Oregon, Eugene).

The Fondation IPSEN Neuronal Plasticity prize is awarded to researchers in recognition of outstanding contributions in the field of neuronal plasticity: development, synaptogenesis, ageing, regeneration, grafts, growth factors, etc. The prize may be shared by several researchers involved in the same research field. The Fondation IPSEN was established in 1983 under the aegis of the Fondation de France.

“The Nature of Music”

Musical abilities are generally regarded as an evolutionary by-product of more important functions, such as those involved in language. However, there is increasing evidence that humans are born with an inclination for music that evolves spontaneously into sophisticated capacities that are unique to music. Recent findings also suggest that the brain is equipped with a music neural network that can be selectively compromised by a congenital anomaly. The study of such congenital anomalies provides a natural experiment-a rare chance to examine the biological basis of music by tracing causal links between genes, environment, brain, and behavior.

Isabelle Peretz is Professor of Psychology and the holder of a Canada Research Chair in neurocognition of music. In 2005, she became the founding co-director of the international laboratory for Brain, Music, and Sound research (BRAMS). Dr. Peretz is also the founding Editor-in-chief of Frontiers in Auditory Cognitive Neuroscience, the recipient of several awards, and a fellow of the Royal Society of Canada and of the American Psychological Association. She is renowned for her work on congenital and acquired musical disorders (amusia) and for pioneering the study of the biological foundations of music in general. Her research focuses on themusical potential of ordinary people, its neural correlates, its heritability and its specificity relative to language. She has published over 150 scientific papers on a variety of topics, ranging from perception, memory, and emotions to singing and now, dancing.

“Music in the Brain: Pitch, Plasticity, Imagery and Emotion”

How does the brain allow us to perceive music? How do we imagine musical sounds? Why does music elicit emotion? Neuroscientists are increasingly interested in such questions because music can be a powerful way to reveal the inner workings of the nervous system. The lecture will touch on three topics. First, we discuss functional and structural brain imaging data that identify specializations for pitch perception in the right auditory cortex. These specializations are relevant to plasticity because they can also be modified by musical training. Moreover, anatomical cortical features in these same regions are predictive of behavioral performance on melody perception tasks, suggesting that predispositions may also exist. Second, we deal with studies of musical imagery. Using experimental tasks that require active retrieval and imagery of melodies, we can identify auditory cortical regions recruited both by real and imagined music. The final topic, music, and emotion, is of interest because emotion is such an integral part of music. We have concentrated on musical pleasure; findings from these studies indicate that strong positive emotion in music seems to be mediated via the mesolimbic dopaminergic system, typically concerned with biological reward and motivation. Further, we can dissociate distinct dorsal and ventral striatal contributions to anticipatory vs. experiential components of music processing, respectively. Such findings raise additional questions about the broader role of music in human experience.

Robert Zatorre is a James McGill professor of neuroscience at the Montreal Neurological Institute of McGill University. Dr. Zatorre’s research explores the functional and structural organization of the human brain using neuroimaging and behavioral methods. His principal research interests relate to the neural substrate for auditory cognition, with special emphasis on two complex and characteristically human abilities: speech and music. He and his collaborators have published over 200 scientific papers on a variety of topics including pitch perception, musical imagery, absolute pitch, music and emotion, perception of auditory space, and brain plasticity in the blind and the deaf. In 2006 he co-founded the international laboratory for Brain, Music, and Sound research (BRAMS), a unique multi-university consortium dedicated to the cognitive neuroscience of music and auditory cognition. 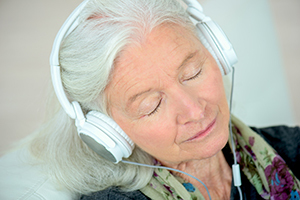